The morning of my Grand Canyon adventure started at 4am. I left Flagstaff and was on the road by 4:30 just as the sun began to lighten the sky in beautiful hues of blue and pink. I began the four hour drive to the North Rim on my friend, Route 89 North. Off to my left I could see the faint outline of Humphrey’s Peak in the distance; I’d heard great things about hiking it, and I hope to some day soon. My drive continued, solitary and quite desolate. It was almost eerie how alone I was on the road.  After awhile I continued onto 89A and then started to see some change in the landscape. As I drove towards Marble Canyon, I had to pull off and snap a few spectacular shots.

Right around Navajo Bridge, I crossed the Colorado River. I looked down as I crossed and gasped in amazement, it was so vast! I was finally getting close! The landscape changed again and the temperature dropped further as I got closer and closer into the Kaibab National Forest. 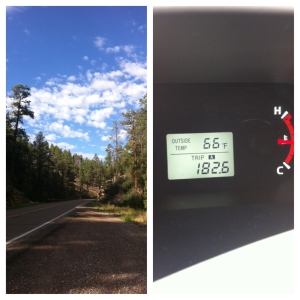 At the very small town of Jacobs Lake, I turned south onto 67, the Grand Canyon Highway, and drove the last 25 miles to the park. As I finally entered a clearing, I saw a coyote flash across the road in front of me, a gaggle of wild turkeys, and then herds and herds of bison!

Finally, I saw the entrance sign for the park, jumped out and snapped a picture of my excitement.

I came to the Ranger Entrance and was greeted by a delightful young ranger lady who asked how I was. “Overwhelmed” I replied, and she smiled as she suggested that I purchase an annual pass to all the National Parks, gave me my maps, and sent me on the final 12 mile drive to the Visitors’ Center. As I pulled into the parking lot, I caught a glimpse of the Canyon on my left and screamed aloud. It was spectacular!  I parked the car and walked up to a ranger in the Visitors Center.  I’d identified a trail to hike that day, the Uncle Jim Trail, and she smiled and said it was a great choice. The trail winds through the forest to a point overlooking  the canyon. She directed me back down the road about a mile to the Kaibab Trailhead parking lot where I would find the start of my hike. Before doing that, I entered the Lodge itself, walked to the back and out the back door, and beheld the magnificence of the Grand Canyon for the first time. Folks, I just cannot put into words that first look at the majesty of this natural wonder.

Excited for my hike, I loaded my backpack with water, lots of snacks, and other essentials. I drove to the Kaibab Trail lot, parked my car, put on my hiking shoes, and by 9:30 entered the Ken Patrick Trail that would eventually turn off to the Uncle Jim Trail Loop. Three times I stepped aside for groups taking mule rides on the trail, but for the most part it was a nice solitary hike. I think I probably saw only 5 or 6 other hikers at the most in the entire three hours. The trail was fairly flat and easily negotiated, (I had to watch out for piles and piles of mule poop) and after about 2 hours I reached the far point of the loop, followed a very narrow path, and came to the small isolated point overlooking the Canyon. It was dizzingly spectacular. Pictures don’t really portray the vast scope of the canyon. I sat there as close to the edge as I was comfortable and ate an apple as I enjoyed the silence all around me, save for the wind and the bees buzzing around me.

After that short rest, I got up, dusted myself off and continued the loop back to the trailhead. This trail was so lightly traveled that once I got off the Uncle Jim loop and back to the Ken Patrick Trail, I could see my footprints from the beginning of my hike. When I finally cleared the trail back to the parking lot, I headed back up to the lodge and took the short half mile Bright Angel Point Trail around the lodge. This little trail challenged my fear of heights.  I got as close to Bright Angel Point as I could before finally turning back. Patti Hall would understand completely…at times I wanted to crawl on my hands and knees it was so scary!

One thought on “Grand Canyon!!!”