I left Sedona very reluctantly…I was so much at ease there and could have easily stayed much longer there, taking in the beautiful Red Rocks and hiking my life away. But Flagstaff beckoned, and I’d heard really wonderful things it. I’d been urged to take the back way up to Flagstaff, north on 89A, and I did just that. The drive was magnificent. Very narrow winding roads through lush forests of pine. At the top was a little turnoff for a scenic view. Tonya had suggested that I stop there, so I pulled off and beheld the most splendid view – as close as I could get to it without getting dizzy from my fear of heights! This scenic turnoff was even more pleasant as it was lined with several Native American booths with  crafts, jewelry and gifts. I bought a lovely little money clip etched with my spirit totem, the wolf. 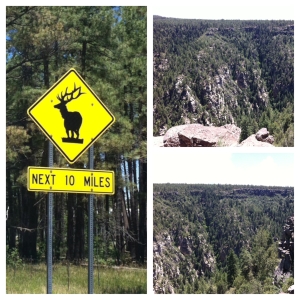 I arrived in Flagstaff a little bit after 1pm, and right away knew that I would be staying more than just the night. I found the historic Route 66 and took it into the little downtown area, parked my car, and started walking down San Francisco Avenue. Quaint is the word that accurately describes this little area. After checking out several outdoor gear shops, I found one with a much needed hiking hat, on sale. After having a delightful and hearty Blackbird Porter at the Flagstaff Brewing Company, I passed a great little music store. Finally,the opportunity I’d been waiting for! I went inside and found what I’d been searching for since I visited Gretchen and Tim in Bethesda. Now I just have to learn how to play the damned thing!

I drove back along Route 66, checked into my hotel, added an extra night, and relaxed for a bit. There was no need to search high and low for a good place to eat. Tonya and Chris’ friend Steve had already pointed me to Diablo Burgers, right in the heart of the little downtown area. Diablo Burger is very small…seating inside is just a few high top tables and the bar with a TINY kitchen behind the bar. The place is so small there’s no bathroom within their restaurant – you have to walk back around somewhere. There are several picnic tables outside for outdoor dining. I took a seat at the bar and enjoyed one of their seasonal light ales. Not sure what it was, but it was lovely on this hot evening. I can’t remember what the name of the burger that I ordered, but it had pesto, a fried egg, and I asked them to throw on some crispy bacon (‘cause bacon makes everything better). The burger arrived perched on a bed of fantastic hot fries. All Diablo burgers are served on English muffins – great by me, I love them that way. It was one of the best burgers I have ever had. Cooked perfectly medium rare. I finished the burger,  but could NOT even make a dent in the pile of fries.

Dusk arrives early in Flagstaff, so I headed back to the hotel. I made one stop…at a FANTASTIC little shop called McGaugh’s Smoke and Bottle. This is an incredible little store with an amazing variety of beer and a fantastic selection of cigars. I chose about 6 little tiny cigars and drove back to my hotel, where I enjoyed a little cherry cigar in the lovely cool dark before hitting the sack.

Folks, I am not kidding, the sun is UP over the horizon by 5:30am this time of year in Flagstaff. I was up and dressed and headed over to Crossfit Flagstaff, a mere 2 miles from where I was staying. I walked in for the 6am class and was greeted not by the resident crossfit dog, but the resident crossfit CAT, Clark. Wow! Clark pointed me in the direction of the coaches of the morning’s class, Stephen and Rachel. I signed myself up (most crossfits I’m visiting have fancy schmancy electronic Wodify or similar computer programs), bought myself a Crossfit Flagstaff shirt, and began my warmup. This was one of the biggest and nicest crossfit boxes I’ve visited on my trip…similar in size and scope to Crossfit Maximus. We all did a prescribed warmup on our own, then Rachel led us through a short barbell complex group warmup. There was no strength element to the class (boo) and we went directly into the WOD of the day, which was named the River Styx. 1000 meter row followed by 21-15-9 KB swings and burpees. After well over a week with no crossfit, it felt pretty good to have my butt kicked!

After class I went right across the street to a littlle coffee shop, enjoyed a cup of strong yummy brew, and in walks one of that morning’s 6am crew. Turns out this guy is from Macomb, IL (right down the road from where I went to undergrad) and he extolled the virtues of Flagstaff for me (as if I hadn’t already realized them!). After that, I grabbed a quick shower at the hotel, and then headed back downtown for breakfast at MartAnne’s – also recommended by Tonay and Chris’ friend Steve! At his suggestion, I ordered the Chilaquiles, Fratelli style (covered in pork salsa verde) and folks, they were out of this world. I made a valiant effort but will not disclose the after picture. I tried….really I did. 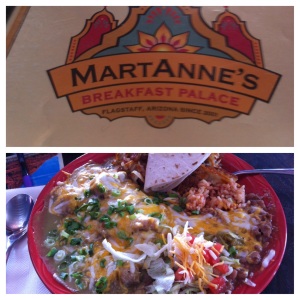 What to do now with the whole day in front of me? Tonya had suggested the chair lift at the Arizona Snow Bowl, but unfortunately it only runs Friday through Sunday. However, there was a decent little climb very close to me …. The Elden Lookout Trail is about 2.5 miles one way and about a 2000 foot elevation to the top. It was cloudy and perfect for the climb. I drove a few miles to the trailhead and started up. The climb was very difficult – steep, very rocky, and quite strenuous. For just a short moment I thought I was in over my head, but just kept telling myself to put one foot in front of the other. Finally I made it to the top, and enjoyed a stunning view of Flagstaff. I have to say that crossfit really is a great preparation for climbing these higher elevations.

After a tough crossfit workout and an even tougher climb up Mt. Elden, I was BEAT. I headed back to the hotel, took a well deserved shower, and drove back to Flagstaff Brewing Company. This time, I chose a wonderful Coconut Porter and at the bartender’s recommendation, ordered a half order of poutine. I had enjoyed an authentic poutine when I traveled to Montreal in 2004 for the GALA festival with VOICES. This was not quite up to the classic poutine, as there were no cheese curds, but after all that activity, it tasted pretty damned good. For those of you who don’t know what poutine is….it’s a bed of french fries smothered in brown gravy and topped with cheese curds. It’s OUT OF THIS WORLD.

My final destination for the day was the Lowell Observatory, about 2 miles further down the road. I arrived just in time to hear a fantastic lecture on the discovery of Pluto (the planet that’s not a planet anymore), followed by a talk inside the rotunda on the how to’s of identifying planets, stars, constellations, etc. Unfortunately it was a bit too cloudy for stargazing, so I headed back to my hotel room and looked forward to the next day – THE GRAND CANYON!