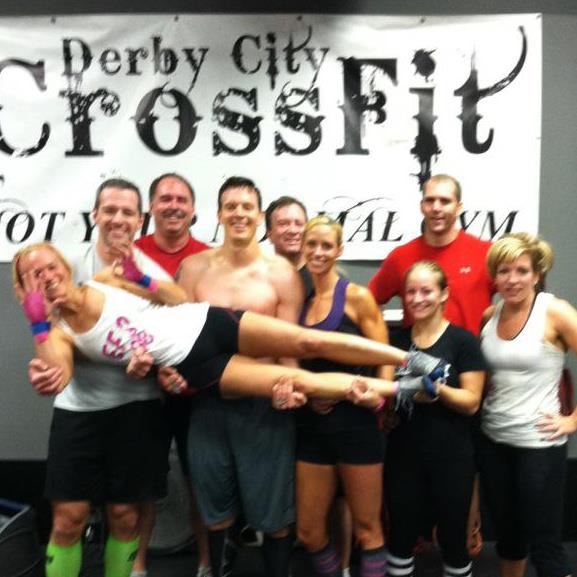 The year was 2009. I belonged to JCC and participated in several group fitness classes, including spin and bootcamp. My favorite instructor was Susan, a no-nonsense trainer who led very challenging classes. Her Sunday morning spin class was my favorite. Through time we became friends and soon she started a Meetup group that she named FitChicks. She set up outings in which we’d share fitness and nutrition goals over a healthy meal, and coordinated group outings to various fitness programs around town including hot yoga, zumba, bodypump and jazzercise. One day in December she informed us she had set up a visit to a local crossfit gym. I was intrigued and couldn’t wait for that day to arrive.

The day finally arrived – Thursday, February 18 at 6:30pm at Derby City Crossfit on Market street. When I walked in my senses were overwhelmed – loud music, big metal rigs with heavy metal weights clanking loudly,  big men with weightlifting belts, people swinging kettlebells and lifting barbells. Slowly our group of Fitchicks gathered and was greeted by a tall, good looking bearded man who gruffly introduced himself as Ben, the owner of DCCF. With him was his girlfriend, a slender and gregarious girl who introduced herself as Kat. Ben explained what the evening was going to hold for us – we’d be given a brief description of what crossfit was all about, followed by some stretching and mobility, skill work, and then a “WOD” which stood for Workout of the Day. The skill work involved pullups and although most of us fitchicks couldn’t perform an unassisted pullup, we worked on scaled versions using resistence bands. I felt like I was entering some new secret and wonderful world of fitness. So many varied exercises! Once we were done with the skill, we had a little routine with some incomprehensible name of  “AMRAP.” All I remember was that it was comprised of assisted pullups, pushups, and airsquats.  When the routine was over, I told Kat that I was relieved to get through the WOD. To my chagrin Kat laughed and said, no that was just a little warmup! The actual WOD that we were going to perform that night was comprised of dumbbell snatches and burpees. I was excited and scared at the same time, I had no idea what a dumbbell snatch was but I loved burpees!  Ben and Kat went through the movements with us – showing us the proper technique of the single armed snatch, first with no weight and then using dumbbells. Finally the WOD began and I absolutely loved it! I even remember the Motley Crue song blaring in the background, Girls Girls Girls. I was instantly hooked, and Susan, another girl and I signed up for memberships on the spot.

After that, my days at JCC were over as I threw myself wholeheartedly into Derby City Crossfit. Every weekday, I’d eagerly wake in the wee hours of the morning to attend the 5:30am class, thrilled with all the different challenges that crossfit presented and the camaraderie cultivated among my classmates. Crossfit wasn’t for everyone, it seemed, and new members came and went. One day, as Kat took a group of beginners through a workout, I noticed a tall, dark haired girl throwing herself into the workout with an incredible amount of enthusiasm. I remarked to Kat “She really gets it!”

That girl was Erin, who ended being one of my best friends and the best workout buddy I could ever ask for. Throughout the next several years, Erin became one of my biggest sources of support, inspiration, and motivation, always cheering me on to do more than I could on my own. She had an unfailing faith in the abilities of everyone at the gym, a determination and drive to improve her own life and the lives of everyone with whom she surrounded herself, and an energy and optimism that was without comparison. We worked out together in the 5am class, lifted together in Darkside Ladies (a powerlifting program), cooked together, trying out new recipes to fuel our bodies (she is an amazing cook!), and generally just encouraged and supported each other in everything we did, in and out of the gym. 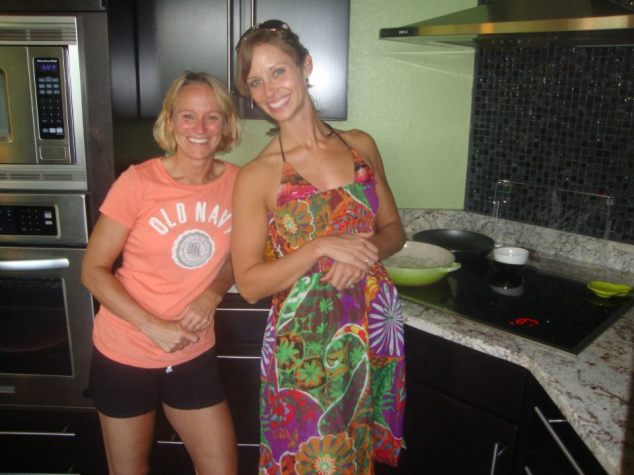 Another dear friend who joined the gym later, coached classes, and also worked out alongside us was Lauren. An on-off but beloved member of DCCF was Erin’s best friend Jess. I firmly believe one of the biggest elements to succeed in achieving your goals in the gym is to have motivating workout partners. I enjoyed many fun-filled workouts in the gym and raucous antics outside of the gym with my girls.

Erin was an inspiration not only to me, but to our 5am class and the entire DCCF community as well. She took the initiative at any opportunity to have fun. Not a holiday went by without Erin coordinating appropriately themed costumes. If you dared to show up without one, invariably she’d pull a spare or two out of her duffle bag and hand it over. Our 5am crew became a tight-knit group, in the gym and outside the gym as well. I couldn’t have asked for a better group of folks with whom to work out.

Erin loved any excuse for a party with our class members. She coordinated paleo meal nights, a memorable NON PALEO cereal eating contest (in which she demolished everyone, including some pretty strong men), and a cherished summer weekend trip to her lakehouse with several gym girlfriends.

Crossfit and everything that went along with it became such an important aspect of my life that throughout the next several years, I became Level 1 certified and also achieved crossfit certifications in powerlifting, mobility, and Olympic lifting. For a few months in 2012 and 2013, I focused on powerlifting and participated in Laura Phelps-Sweatt’s women’s meets in Cincinnati, surrounded by some of the strongest and most talented female powerlifters in the country.  Later in 2013, inspired by Erin’s lead, I went totally outside of my comfort zone and prepared for and participated in a figure competition, and in June of 2014 participated in my first crossfit competition, Four Barrel Crossfit’s Beginners Competition. 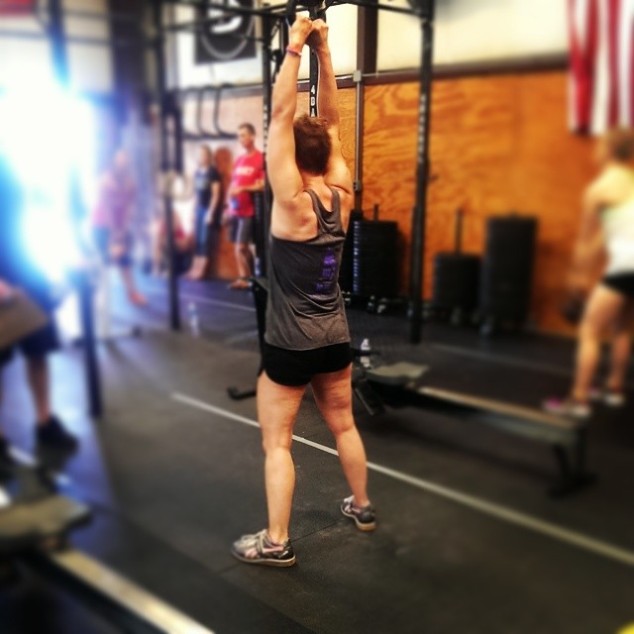 The evolution of Derby City Crossfit itself has undergone much change since those early days on Market Street. In the spring of 2011, the gym moved to its present location in St. Matthews. Just a few months after that, Ben and Kat parted ways and ventured out on their own, leaving the gym under the leadership of a quintet of men. One afternoon in the Fall of 2011, I received a text from Sean, one of the founding owners. Some folks had gathered drinks at Drakes and he asked me to stop by for a drink. A loud and most likely tipsy group including the other owners, Slater, Shark, Sean and his soon to be wife Kellie, and Ryan sat around the table. To my astonishment, they asked me to coach some classes at the gym. Humbled and honored beyond words, I accepted, and was lucky enough over the next three years to coach some of the most dedicated, talented and strong athletes I’ve ever known. I was so thankful for the opportunity to bring to light my passion to inspire and motivate others to do more than they think they can. 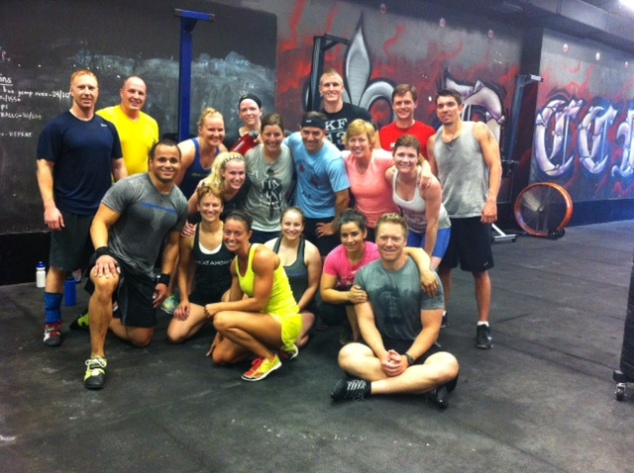 When I started back up at the gym after returning from Montana this past June, much had changed. Shark and Slater were the only remaining owners and ran the gym full-time. A new rig and shiny new equipment was in place.  Most of the “old guard” in the 5am class had moved on. Erin had taken a position at another gym after working as a loved and respected coach at DCCF and I felt a bit out of place. But 5am is always a special group, and for the past 6 months I was blessed with other wonderful workout buddies (love you Tyler and Nathan) and two very special coaches, Kara and Robbie. I will always remember their kindness, encouragement, and love.

I am so grateful to everyone at DCCF – every single coach I’ve ever had, every single classmate with whom I’ve worked alongside, and every single member I’ve had the honor to coach. To be a part of such a unique (yes, you Clinton and Leslie), loving, and inspirational gym community is something I will cherish forever. I love you all and miss you!